skip to Main Content
COVID-19 Live Dashboard Sales - Forecasts - Our help
BSCB Exclusive: The car landscapes of 45 Chinese cities and regions
Test Drive: The VW T-Cross vs. the Australian desert
* Full Year 2021 Reports * 137 markets available
Test Drive: Is the Kia Seltos worth all the hype?
10 countries and 9000 km in a Dacia Duster
BSCB Exclusive: Your Guide to all 192 Chinese Brands

For the 6th year on BSCB it is now time to share with you the best-sellers in each Australian State/Territory, and for the 2nd year we are able to extend the State rankings to the Top 100 models. This is exclusive data you won’t find anywhere else on the web. For the 4th straight year, the Toyota Hilux is the only nameplate managing three State wins (Queensland, Western Australia and Northern Territory) but this year its performance is finally rewarded with the #1 position nationwide (See our Australia Full Year 2016 article here). The Mazda3 loses Victoria but wins South Australia by the skin of its teeth and scores two State wins along with the Australian Capital Territory while the Toyota Corolla holds on to Australia’s #1 state, New South Wales. But the real winner in 2016 is the Ford Ranger: after snapping its first ever State win in 2015 in Tasmania, Ford’s ute not only holds onto this State but also snatches Australia’s #2 State: Victoria, and misses out on a South Australian win for just two sales… Finally, for the first time in its 38 year-career, the Holden Commodore doesn’t win any Australian State in 2016.

The Toyota Corolla remains the best-seller in New South Wales.

First ever win in Victoria for the Ford Ranger.

The Toyota Hilux remains #1 in Queensland for the 10th consecutive year.

Queensland is only one of two States to see its total sales drop in 2016: down 1.1% to 233.026 units. As local production is scheduled to end in the country in 2017 and with no recent history of local automotive manufacturing in the State, pure importers hold a much larger share in Queensland than nationwide: only two nameplates (the Ford Ranger and Holden Colorado) are not Asian in the Top 20 vs. four in 2015. Queensland remains the kingdom of pickup trucks, affectionately nickamed “utes” in Australia (for utility), with 7 of them placing in the Top 16 vs. just 3 nationally. The Toyota Hilux celebrates ten consecutive years as the best-selling vehicle in the State and posts a flamboyant 14% gain to 10.512 deliveries, the Ford Ranger improves 17% and two spots to #4, the Mitsubishi Triton (-10%) drops one to #6, the Holden Colorado (-4%) also at #9, the Nissan Navara is up 25% and 4 ranks to #11, the Isuzu D-Max gains 8% but drops 3 ranks to #13 and the Mazda BT-50 edges up 0.2% to #16. In 2nd place overall, the Hyundai i30 is up 17% and two spots on last year, overtaking the Toyota Corolla (-10%) while the Mazda3 freefalls 14% to #5. The Hyundai Accent shoots up 73% and 14 spots on 2015 to brilliantly break into the Top 10 at #7.

The Toyota Prado ranks 6th in Western Australia vs. #20 nationwide.

Handicapped by the end of the mining boom, the Western Australian new vehicle market suffers a third consecutive sizeable decline in 2016 at -5.6% to 100.234. This State has lost 20% of its annual volume since the high of 125.544 sales reached back in 2013. Similarly to Queensland, Western Australia’s rugged terrain favours four-wheel-drives and the Toyota Hilux posts a 9th consecutive year atop the sales charts thanks to deliveries up 11% to 4.599. The Ford Ranger is catching up though: up 17% and one spot on 2015 to land in 2nd place with 3.916 sales. The Hyundai i30 also gains one rank to #3 thanks to sales up 15%, both nameplates overtaking the Toyota Corolla (-10%). Below the Mazda3 (-15%), the Toyota Prado remains at a stunning 6th place vs. #20 nationwide and is now followed by the Hyundai Tucson (+290%) – posting its highest annual ranking in all of Australia at #7 – and the Hyundai Accent (+75%). 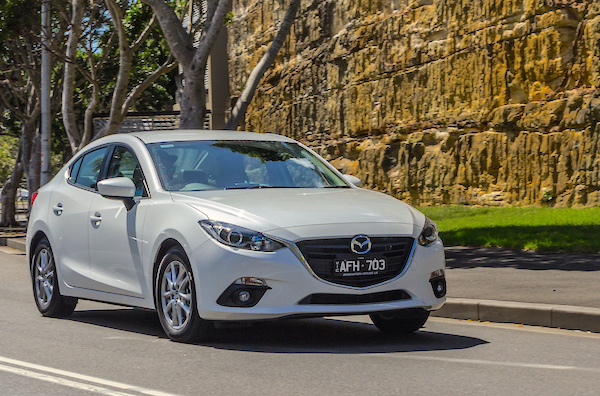 The Mazda3 replaces the Holden Commodore at #1 in South Australia. Picture caradvice.com.au

New vehicle sales in South Australia are up 3.9% year-on-year in 2016 to 71.738 registrations and we have an all-new market leader in the State this year: the Mazda3, enjoying a 10% rise to 2.712 sales. The race was incredibly tight with the #2 though: the Ford Ranger ends the year just two lonely sales below the Mazda… Leader in 2015, the Holden Commodore (-9%) abdicates its title and drops to third place. With its local production scheduled to end in October 2017 before being replaced by an imported vehicle, we will probably never see the Commodore at #1 in any Australian State anymore. The Toyota Hilux is up a very vigorous 22% in SA this year but remains in 4th place, ahead of the Toyota Corolla up 2% but down 3 spots and the Mitsubishi Triton (-2%). The Hyundai i30 is up 19%, the Mitsubishi ASX surges 29% to break into the Top 10 and the Subaru Forester is up 28% to #12.

The Mitsubishi ASX hits its highest State ranking in Tasmania at #3.

The Hyundai i30 hits its highest ranking in ACT and Queensland.

The Toyota RAV4 ranks 4th in Northern Territory: the highest in Australia.

The Northern Territory, home of Uluru (aka Ayers Rock) symbolises Australian nature at its wildest. Larger than France, Germany and Spain put together, it is only populated by 243.700 inhabitants, 60% of them in its capital, Darwin. The smallest market in Australia, Northern Territory saw its sales gain 2% year-on-year in 2016 to 10.736, still a notch below the high of 11.393 hit in 2013. The Northern Territory is Toyota territory: the Japanese manufacturer holds more than double the market share it has nationwide at 38.8% vs. 17.8% across the country… Toyota places 8 nameplates inside the Top 11, with the Hilux holding the top spot for the 19th year in row with 10.4% market share, followed by the Toyota Corolla at 5.4%. There is a surprise in third place: the Ford Ranger gains 21% to step on the podium, whereas Toyota monopolised the Top 5 in 2015. The Toyota RAV4 impresses at +26% to #4, the Prado drops 27% to #5 ahead of the Mitsubishi ASX (+56%). Notice also the Toyota Fortuner breaking into the Top 20 for its first full year of sales.

Great Wall V-Series. For the first time in Australia a Chinese model ranks in the…

The Toyota Hilux is #1 in Queensland, Western Australia and Northern Territory * See the…

For the first time in Australian history, there are two MGs in the Top 10.…