skip to Main Content
COVID-19 Live Dashboard Sales - Forecasts - Our help
Test Drive: Is the Kia Seltos worth all the hype?
The world's best-selling car vs. the Australian Outback
Test Drive: The VW T-Cross vs. the Australian desert
10 countries and 9000 km in a Dacia Duster
* Full Year 2021 Reports * 85 markets available
BSCB Exclusive: Your Guide to all 190 Chinese Brands

2016 Chevrolet Cobalt – Chevrolet toppled Fiat as the most popular brand in Brazil.

Far from levelling out, the situation is getting darker and darker for the Brazilian new car market in the midst of the economic and political instability that has plagued the country for the past few years. The descent to hell is accelerating: -25% over the first six months of 2016 compared to -19% a year ago. At just 951.206 deliveries over the period, new car sales in Brazil drop below the million mark halfway through the year for the first time a full decade. In 3 years – since the 1.707.814 sales hit in 6 months in 2013 – the Brazilian market has depressingly shrunk by almost half.

If Chevrolet managed to nudge into positive territory for the first time in 2.5 years in June, its year-to-date performance is only just above the market at -23% to 16.6% share but its immediate followers Fiat (-39%) and Volkswagen (-36%) literally fall apart. A year ago, Fiat was still and by far the most popular manufacturer in Brazil with 18.6% share but now only holds 15.1% of a freefalling market. As we’ll see further down, Fiat has started to throw everything it can into the market with two significant new launches this year but so far it hasn’t been enough to stop the bleeding.

The Toro may enable Fiat to slow down its freefall during the remainder of 2016.

Hyundai (-5%) and Toyota (-1%) are the real winners atop the ranking. The Korean manufacturer gains one spot compared to a year ago to brilliantly establish itself in 4th position and sees its market share shoot up from 7.9% to a very symbolic 10.1% so far this year. Toyota for its part improves from 6.8% to 9%. Once one of the Big 4 in Brazil, Ford implodes 40% to erode its market share from 10.6% to 8.5%. Renauit (-22%) and Honda (-14%) improves marginally while Jeep (+234%) still benefits from the start of its production localisation. Peugeot (+2%) is the only other carmaker with volume gains in the Top 20. 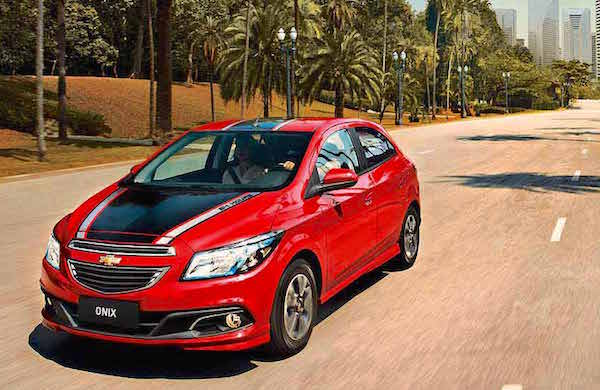 The Chevrolet Onix is now the uncontested market leader in Brazil.

If the Onix was the first Chevrolet in 30 years to finish the year at #1 in 2015, a year ago over H1 2015 the Fiat Palio was still holding the torch. How times have changed. In the space of one year, the Palio has lost half its sales (-49%) and dropped four spots to #5, returning where it had been for the past two decades: below the VW Gol (#4). Meanwhile the Onix is the new uncontested market leader, incredibly improving 23% in a market down 25% to 68.535 sales and 7.2% share (it held just 4.4% a year ago). In its shadow, the Hyundai HB20 has also hit the bullseye: up 9% to 55.922 and gaining almost two percentage points of market share from 4% over H1 2015 to 5.9% now. The Ford Ka takes advantage of its relaunch to gain two spots and round up the podium despite evolving exactly like the market at -25%.

One year ago: Brazil 1st Half 2015: Fiat Palio #1, models ranking turned upside down

Brazil November 2010: Gol at its highest this year