skip to Main Content
Test Drive: Is the Kia Seltos worth all the hype?
Test Drive: The VW T-Cross vs. the Australian desert
BSCB Exclusive: Your Guide to all 199 Chinese Brands
** Full Year 2022 reports ** 54 markets available
The world's best-selling car vs. the Australian Outback
10 countries and 9000 km in a Dacia Duster
USA Full Year 2021: Exclusive State by State rankings now available

The Hyundai Solaris is responsible for a once-in-a-generation market shift in Russia.

Check out 45 years worth of Russian Archived data here

After a catastrophic year in 2015 (-36%), the Russian new light vehicle market lodges a fourth consecutive year of decline but seems to have bottomed up in 2016 with a more digestible 11% drop – and even one month in positive (November). However at just 1.425.791 sales, Russian sales are still greatly handicapped by the economic crisis triggered by low oil prices and sanctions over the Ukrainian war, and have cancelled over a decade of growth and reach their lowest level in 12 years (since 2004). Local data provider the Association of European Businesses (AEB) believes the Russian market will end its skidding in 2017 and predicts a moderate 4% gain to 1.48 million units.

After years of seemingly unstoppable decline, homegrown market leader Lada posts the best performance of all seven best-selling manufacturers in Russia in 2016 thanks to the gearing up of the Vesta and X-RAY: down just 1% to see its market share up by almost two percentage points to 18.7%. A paradoxical situation given the historic event in the models ranking (see further down). Kia (-9%) and Hyundai (-10%) evolve slightly better than the market, resulting it similar market share, both above 10%. Renault (-3%), Toyota (-4%) and Volkswagen (-5%) fare much better and gain significant share. Nissan on the other hand crumbles down 23% to #7 overall.

Lexus soars 19% year-on-year in a Russian market down 11%. Picture zr.ru

A once-in-a-generation event has unfolded throughout the year in the Russian models ranking: for the first time since the creation of the Lada brand in 1970, a foreign nameplate is the annual best-seller in the country. As we predicted at the start of the year, the Hyundai Solaris brilliantly takes command of the Russian sales charts despite sales down 22% to 90.380 due in part to the discontinuation of its hatchback variant in the St Petersburg plant. Paradoxically, after topping the monthly charts for 7 months in 2015, the Solaris only needed to do so 4 times this year while the Lada Granta ranked first 5 times and the Kia Rio led the way for 3 months. All three models fit within less than 3.000 sales or 0.2% market share at year-end, with the Granta reclaiming the 2nd spot by the skin of its teeth thanks to two months spent at #1 at the end of the year.

Instant blockbuster: the Hyundai Creta has been the #1 SUV in Russia ever since its August launch.

The main culprit for the Granta’s demise is to be found in 4th place: the all-new Lada Vesta, launched in November 2015, geared up all through the year to finish at a record 7.014 sales and 4.8% share in December. Over the Full Year, the Vesta adds up to 55.174 units and will be a serious candidate to the title of best-selling car in Russia in 2017. Below, the GAZ Gazelle (+11%), VW Polo (+5%), Renault Duster (+0.2%), Toyota RAV4 (+13%) and Chevrolet Niva (-5%) all improve their market shares, but the big movers are further down the annual ranking. Launched in August, the Hyundai Creta has been the #1 SUV in Russia since, as incredible as it sounds. It landed directly at #6, peaked at #4 and 5.058 sales in September and remained the booming segment’s leader all the way through to the end of the year, with its annual #16 ranking far from reflecting the extent of its performance. 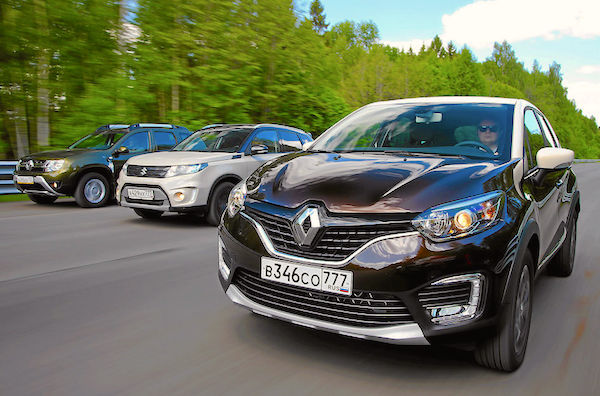 The Renault Kaptur broke into the monthly Top 10 in December.

The Lada Granta is #1 at home for the firs time this year. Picture zr.ru *…

The Renault Arkana ranks #27 over the period. A new Top 135 Passenger Cars ranking…

Russia January 2022: Kia Rio best-seller, Haval and Chery both in Top 10 for the first time

The Kia Rio is the best-selling vehicle in Russia in January. Picture zr.ru New light…