After two days in Xiahe in the Gansu province, it’s time to take on the bus trip back to Xining for further Chinese adventures. One full day of snow completely transformed the landscape to the point that the 7-hour return trip is worth a Photo Report of its own. 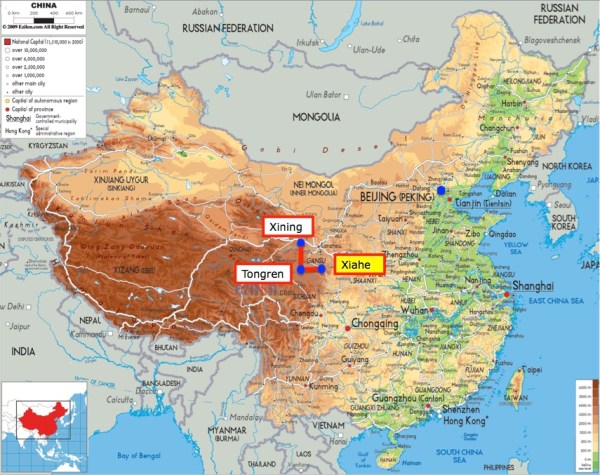 We are retracing back our steps.

On the day of departure and in order to catch the morning bus to Xining I had to wake up way earlier (5:30am) than my hotel’s opening hours, meaning a few minutes of panic when I discovered I was locked inside. The night guard had to be woken up, although I do believe he did not really wake up to unlock the gate – he must be able to do that in his sleep and be all the better for it. The reward however – sunrise on snowy mountains – was priceless.

The vehicles encountered on the road were very rare and quite specific: almost exclusively shared taxis but very few of the bruised and battered Wuling Sunshine I spotted in Tongren. Rather, the newer MPVs such as the Wuling Hongguang S1 and Baojun 730 are the default choice, with their heightened, SUV-like clearance. Heavy trucks were for the most part stuck on the climb to the highest mountain pass on the road, culminating at 3,644m (11,955 ft). Our bus had to stop to put on snow chains or we wouldn’t have gone any further.

Stay tuned for the next stop in our Chinese adventures in Chengdu, Sichuan.

Red rocks before the junction to Tongren.

You won't see many Hongqi H7 in the streets outside of Beijing and Shanghai... This article…