The Ford Ranger is the best-seller in Tahiti for the 2nd consecutive year.

Tahiti is the largest island in and often synonymous with French Polynesia, a French overseas collectivity located in the South Pacific Ocean 4.400 km / 2.734 miles south of Hawaii and 5,700 km / 3,542 miles east of Australia. French Polynesia as a whole is composed of 118 islands and atolls stretching over more than 2.000 km / 1.200 miles. See the location of Tahiti on the map below. Tahiti was part of the Kingdom of Tahiti until its annexation by France in 1880, although it was not until 1946 that indigenous Tahitians were legally authorised to be French citizens.

The Tahitian new car market is down 7% year-on-year in 2015 to 4.314 registrations and is relatively similar to another South Pacific overseas French collectivity: New Caledonia. However here French carmakers have reclaimed a tight grip with Renault leading the way with 10.2% share thanks to sales up 8% ahead of Peugeot at 9.3% (-4%) and Dacia at 9.2% (-3%). Leader in 2015. Ford drops 30% to 4th place, threatened by Toyota that sold just 2 units less. 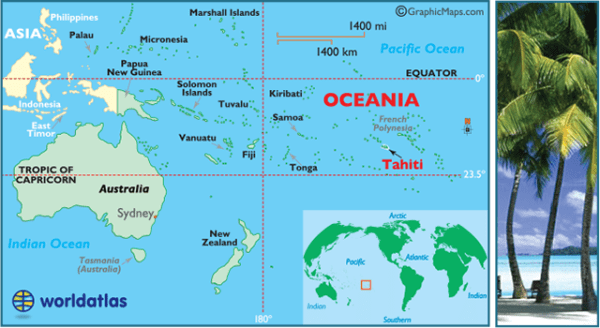