skip to Main Content
COVID-19 Live Dashboard Sales - Forecasts - Our help
World First Half 2020: Discover the Top 800 best-selling cars globally
BSCB Exclusive: Your Guide to all 190 Chinese Brands
BSCB Exclusive: The car landscapes of 45 Chinese cities and regions
10 countries and 9000 km in a Dacia Duster
Test Drive: Is the Kia Seltos worth all the hype?
Test Drive: The VW T-Cross vs. the Australian desert 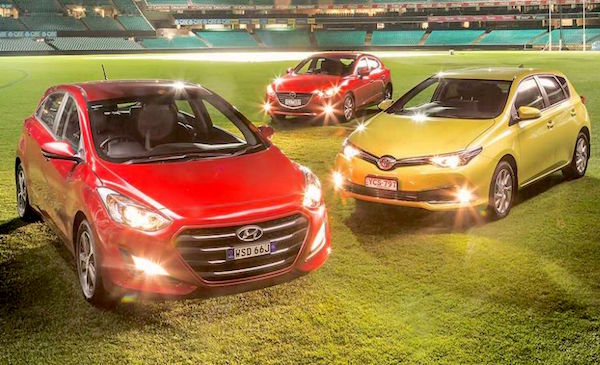 It’s the third overall win for the Hyundai i30 in less than a year.

Despite a slight 0.5% drop in March to 104.512 registrations, the Australian new car market is still on record-beating pace so far in 2016 with sales up 3% over the first Quarter to 285.328 units. State-wise, New South Wales (Sydney) continues on its impressive run with sales up 6.5% and, with ACT (Canberra) up 4%, is the only State to gain ground year-on-year, with Western Australia (Perth) dropping a worrying 8% in the wake of the mining slowdown affecting the region. SUV sales continue to pull the market up at +8% to 38.437 sales and 38% share in March vs. -9% to 43.652 and 41.5% for passenger cars, while light commercials (including pickups) are up 7% to 19.741. Even though it is evolving at record heights, the Australian is artificially pulled by fleet sales in March (+9%), with rental sales up 1% but government sales down 5% and, most tellingly, private sales down 6% to 51.976 or 49.7% share.

Land Rover outsells Jeep in Australia in March and for the first time in at least 5 years.

Australian Subaru sales are up a cool 21% in March.

First incursion inside the Australian Top 10 for the Hyundai Accent. Picture caradvice.com.au

The models ranking sees another momentous event. After June and September 2015, the Hyundai i30 manages a very impressing third win overall in ten months thanks to sales doubling year-on-year to 4.198, clearly ahead of its direct competitors the Toyota Corolla at 3.612 (-15%) and Mazda3 at 3.145 (-12%). Even though this win comes on the back of factory drive-away deals, the i30’s frequency at the top over the past year means its success isn’t a freak event anymore and it now has to be taken into account for the race to the overall title of best-seller in Australia, at a time when passenger cars are in great difficulty. Hyundai also manages to place the Accent at a record 9th place in March, but the Tucson drops out of the Top 15 after ranking at a very impressive 5th place in January.

The Toyota Hilux is in 2nd place overall in March.

Pickup trucks are now purchased as SUVs, and with new generations recently launched, the Toyota Hilux at #2 overall (+16%) and the Ford Ranger at #5 (+22%) are on a roll, with the Mitsubishi Triton at #6 and the Isuzu D-Max hitting an all-time high 12th place overall thanks to 1.792 sales. The Mazda CX-5 at #8 (-4%) remains the most popular SUV in the country and is only marginally affected by the arrival of the smaller CX-3 (#14), while the Nissan X-Trail cracks the Top 10 and the Subaru Forester is up 35% and 11 spots on February to #15.

Despite the new Commodore, Holden is down to its lowest ever volume in Australia. Picture…

Nissan X-Trail * NOW UPDATED with the Top 269 best-selling models! Click on title to…