skip to Main Content
COVID-19 Live Dashboard Sales - Forecasts - Our help
10 countries and 9000 km in a Dacia Duster
BSCB Exclusive: The car landscapes of 45 Chinese cities and regions
* Full Year 2021 Reports * 85 markets available
Test Drive: The VW T-Cross vs. the Australian desert
The world's best-selling car vs. the Australian Outback
Test Drive: Is the Kia Seltos worth all the hype? 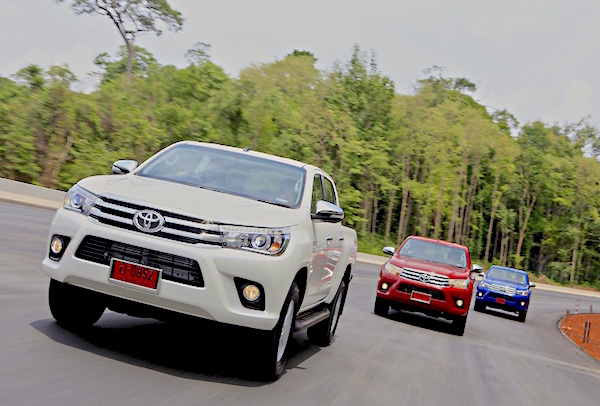 The Toyota Hilux remains #1 despite sales down 17%.

The Toyota Fortuner ranked #3 in August, September, October and December…

The Toyota Yaris remains the best-selling passenger car in the country despite freefalling (-31%) at a similar rate as its two pursuants, the Toyota Vios (-26%) and Honda City (-25%). The Thai market structure is moving towards a lot more SUVs – in line with a worldwide trend: the Toyota Fortuner is boosted up 54% by the new generation launched in July, reaching a best-ever 6.671 sales in December when it ranked #3 overall and the Honda HR-V lands at a spectacular 7th place for its first full year in market, peaking at #4 in June.

…while its archenemy the Mitsubishi Pajero Sport was #3 in November with 7% share.

But the most impressive result is without a doubt delivered by the Mitsubishi Pajero Sport, whose previous generation was never a hit, but suddenly surged to third place overall and 7% market share in November, the highest share hit by a passenger car since Thailand became the pickup factory of the world. Far from being a fluke, the Pajero Sport confirmed this exceptional score in December with a record 5.465 sales and 5.5% share. Other great performers this year include the Mazda2 up 3-fold to #13 thanks to the launch of the sedan variant, the Nissan X-Trail up to #24 and Ford Everest up to #28.

MG5 – China’s MG is slowly starting to make its mark in Thailand.

The Suzuki Ciaz is the best-selling all-new nameplate for the year but fails to really make a mark at #34 and 3.683 sales. The brand event of the year in Thailand is the settling in of Chinese carmaker MG, now assembling locally. Its MG3 lands at #37 with 3.204 sales, the MG6 remains discreet at #76 and 335 units but the MG5 launchd in November is already knocking on the Top 40’s door in December.

Toyota Hilux * See the Top 8 best-selling models by clicking on the title! Many…