skip to Main Content
COVID-19 Live Dashboard Sales - Forecasts - Our help
BSCB Exclusive: The car landscapes of 45 Chinese cities and regions
* Full Year 2020 Reports * 74 markets available
World First Half 2020: Discover the Top 800 best-selling cars globally
10 countries and 9000 km in a Dacia Duster
The world's best-selling car vs. the Australian Outback
Test Drive: Is the Kia Seltos worth all the hype?

Haval is the No.1 SUV brand in China. Can it tackle the Australian Outback then?

If you are a regular BSCB reader, you will already be familiar with the Chinese brand Haval. It has been the best-selling SUV brand in China for the past 13 consecutive years, previously known as Hover – a Great Wall sub-brand – until 2013 when the standalone Haval marque came to life. Last April, the Haval H6 became the first ever SUV to lead the overall Chinese sales charts outright with a stunning 43.946 units sold in a single month. Great Wall has been very efficient at developing the Haval lineup, earning the #1 spot in our annual ranking of the Most impressive Chinese brands both at the Beijing Auto Show in 2014 and the Shanghai Auto Show in 2015. Already extremely successful at home, Haval is now spreading its wheels worldwide and has been available in Australia since last October, even though the brand has yet to make its appearance in the Australian sales charts. Speaking with Haval PR Manager Andrew Ellis, it turns out this is because Haval is still in the process of getting certification by the FCAI – so it should pop up later this year.

The sole Haval dealership in Sydney, located in the Western suburb of Lansvale.

In fact, Haval is now present in a dozen worldwide markets: starting in June 2015 with Russia and Chile, the marque then expanded further in Latin America with Ecuador, Bolivia, Peru and Uruguay, to Asia with Azerbaijan, Georgia and Malaysia, Africa and the Middle East with Iraq, Oman, the UAE, Benin and South Africa and its only truly mature market to-date: Australia, although no sales figures from any of these markets have percolated to the surface yet. In Australia, the brand operates out of 6 dealerships: one in Sydney (pictured above), two in the Melbourne area, one in Brisbane, one in Perth and one in Wagga Wagga near Canberra. If at BSCB we have been very impressed with Haval’s commercial success at home, lightning fast lineup expansion, as well as attractive exterior and interior design, we had not driven one yet. This gap is now filled: today we have access to a Haval H8 for one week. When given the same length of time for a review, local Australian press such as Motoring.com.au only took the car through “freeway-biased commuting [to work]”.

This is not how we do things at BSCB…

We want to drive the Haval H8 from Sydney to Birdsville – and back. (Click to enlarge)

In the manner we did with Albert the Ram 1500 from New York and Los Angeles in 2014 and Bob the Ram 2500 as part of our Alaska to California 2015 adventure, we are aiming at driving the Haval H8 well into the harsh Australian Outback: all the way to Birdsville at the border between Queensland and South Australia, through the unsealed, rough-as-guts and legendary Birdsville Track. It’s a gruelling 5,000 km return trip to be completed in one week only, going through bitumen, dirt, sand, mud, gravel, rocks and bull dust. Needless to say, no Haval-branded vehicle has ever set its wheels that far into the Australian continent yet, so if we manage this feat, it will be a world first, no less. We want to find out whether the No. 1 SUV brand in China can take on the Australian Outback and its treacherous conditions. If nowadays the Birdsville Track can be traversed with any vehicle in dry conditions, wet weather can render it totally impassable in a matter of minutes and the region has received more rain so far in 2016 than it normally does in three years, making it a true challenge for any car.

I took a Mitsubishi Mirage through the Oodnadatta Track in 2003.

There are a few elements at stake in this challenge.

The first is pure and simple survival. The areas we will be exploring with the H8 are some of the most isolated in the world, with almost no traffic, no mobile coverage, no towns for hundreds of km and sometimes no petrol station for up to 500 km. My personal experience of this type of Australian adventure includes driving the Ooodnadatta Track to the West of the areas we will be covering with a… Mitsubishi Mirage in 2003. The conditions were completely dry, enabling a 2WD to pass, but heavy rutting on the track meant it took me four complete days of driving to go through 600km of unsealed roads. I have chosen to undergo the trip alone, with no sat phone. Foolish? It will test the solidarity of fellow travellers as well as the Haval promise of 24/7 roadside assistance in case any technical issues were to point their ugly head. First aid kit, warm clothing (it’s winter in Australia), extra water, food and fuel in the form of two 20L jerrycans are mandatories in order to survive any type of ordeal in the Australian Outback, and these are well and truly on board. 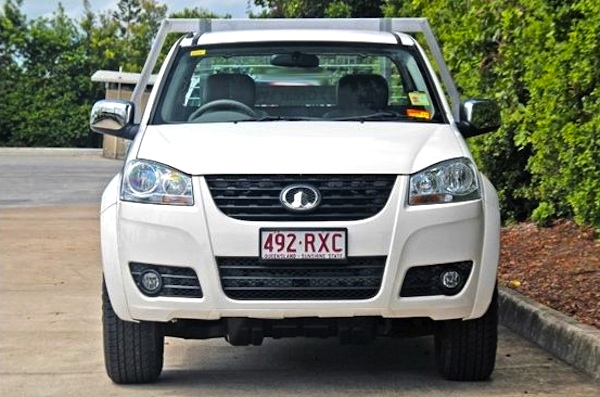 Can Haval replicate the initial success of Great Wall in Australia?

The second challenge is a branding one. In the rare mature markets where they have ventured so far, Chinese manufacturers have to deal with the same level of hostility Japanese carmakers had to suffer in the 1950s and 1960s, then Korean carmakers in the 1980s – some would argue until just recently. Launched in 2009 in Australia, Great Wall has been the only success story of its kind so far here, peaking at #16 in 2011 and selling 37.163 units to-date. An asbestos controversy and disagreement with its previous importer Ateco has meant the brand is currently at a standstill (11 sales in 2016), but is staging a comeback later this year with the new generation Wingle 6 pickup through the same importer as Haval: Performax. Even though insults continue to be hurled at the brand on local automotive forums, they mostly come from customers having never tested a Great Wall vehicle, whereas owners are by and large very satisfied with the reliability of their purchase, especially in the Australian Outback: in 2014 I met a Great Wall owner in Bourke who replaced her ailing Toyota Hilux with a Great Wall SUV and has never looked back since.

The Haval H8 in a scary – yet controlled – posture at the Guangzhou Auto Show 2015.

However, launching yet another brand, Haval, means Great Wall has to start from scratch again and build its reputation from the bottom up. I have been sceptical of this branding strategy that seems like a lot of work where the Great Wall brand had already cleared some ground. I’ll be sure to speak with as many locals as possible throughout the trip to gage the chances of this new brand making its mark in Australia. There are only a handful of other Chinese carmakers operating in Australia currently, but none is coming anywhere near the success Great Wall achieved in its first couple of years in market. LDV (625 sales) and Foton (356) both hold a tiny 0.1% market share so far in 2016, whereas Chery has all but disappeared (9) and both Geely and MG have thrown the towel for now. In other words, market conditions are at an all-time low for Chinese carmakers in Australia and adverse perceptions at an all-time high.

The third challenge – and arguably the most interesting – is a capability one. The vehicle we have at our disposal for the week is the Premium AWD variant which saw its price slashed from AU$44,490 to $41,990 as part of an ongoing stocktake sale. It slots between the $38,990 Premium 2WD and the $44,990 LUX AWD and competes with the likes of the homegrown Ford Territory, the Holden Captiva 7, Nissan Pathfinder and Jeep Grand Cherokee. The H8 is part of a three-model lineup currently offered by Haval in Australia along with the small crossover H2 and the Toyota Prado-competing full time 4WD H9 complete with snow and sand modes.

If the H9 is expected to go anywhere, testing the H8 is where the true challenge resides, as it is what is called in Australia an AWD SUV, meaning the 4WD mode is switched on electronically when the car feels it needs it, prompting some to say it’s not a real 4WD. Add to this the fact that China hasn’t really yet caught up with the worldwide off-road driving fever – most SUVs and crossovers sold there are 2WD-only and never get taken out of the city – it begs the question: is the H8 actually a true 4WD-capable vehicle and can it perform on very poor road conditions? Australia has a long tradition of off-road exploring and true adventure, so it’s the perfect sandpit for such a test.

Give a warm welcome to Damo, our Haval H8 for one week.

More generally, can Haval back up its claim of No.1 SUV brand in China and aspirations of becoming the No. 1 SUV brand in the world with truly capable cars? There’s only one way to find out, and it’s called a wet and muddy Birdsville Track. Before we can set off though, our H8 needs a name. After Albert, Bob the Rams and Charlie our Hawaii Jeep Wrangler, H8’s name has to start with D and he has been baptised Damo – Aussie short for Damian – so he fits in with all the other kids in the yard (See why I chose a male name here). Indeed in Australia, and in particular in the Outback, no name stays intact – even Matt becomes Matty – and all are fondly played with: Jonathan becomes Jono, Dick becomes Dicko. And it doesn’t stop with names: see favourite Australian slang: When in doubt, add an “o”.

Welcome to the Australian Outback, Damo.

Report: Can the No.1 SUV brand in China take on the Australian Outback? Part 3: Orroroo to Lyndhurst

Report: Can the No.1 SUV brand in China take on the Australian Outback? Part 7: Birdsville to Quilpie

150km past Birdsville, the dirt track transforms into an emergency airstrip.  This is Part 7 of…

Report: Can the No.1 SUV brand in China take on the Australian Outback? Part 4: Lyndhurst to Moolawatana homestead

Let the unsealed track fun begin!  This is Part 4 of our Report on driving…