skip to Main Content
The world's best-selling car vs. the Australian Outback
* Full Year 2021 Reports * 138 markets available
BSCB Exclusive: Your Guide to all 192 Chinese Brands
USA Full Year 2021: Exclusive State by State rankings now available
Test Drive: The VW T-Cross vs. the Australian desert
Test Drive: Is the Kia Seltos worth all the hype?
10 countries and 9000 km in a Dacia Duster

At the Beijing Auto Show 2016, I had the privilege of interviewing Laurens van den Acker, Senior Vice President of Renault Corporate Design since 2009. Laurens is responsible for all the latest Renault designs, including the Kwid, Twingo, Clio, Captur, Megane, Scenic, Kadjar, Espace, Talisman, and most recently the all-new Koleos revealed in Beijing.

It is a very significant and exciting time for Renault in China, as the French carmaker has just become a local manufacturer with the launch of the China-made Kadjar in March (6.264 deliveries in 3 months). The perfect time to catch up with Laurens and ask him about his perspectives on the Chinese, Indian and other global markets. You will find below a transcript of the interview, originally conducted in French, and as it was the case last year with Dacia, I become the interviewee towards the end…

AM: You have now redesigned  the entire Renault range…

LVDA: With the Alaskan pickup coming up later in 2016, it is true than in just 6 years we have been able to redesign the entire Renault lineup. I was tasked with making beautiful cars with a recognisable identity and a sensual Latin, French style that differentiates itself from Dacia. I believe we are in the process of successfully completing this task indeed. It is very exciting.

Still no plans for Renault to launch the Duster in China.

AM: We were just discussing this with Matt before, wouldn’t it have made sense to launch the Duster in China?

LVDA: One of the reasons we haven’t launched the Duster here is that we built a factory in Wuhan that is based on the CMF platform which isn’t the one the Duster is using. A Duster launch in China is not completely out of the question, but whereas in Europe we have an advantage with the Duster that has no competitors in its price segment, in China we would be competing with all the Chinese brands. It wouldn’t be standing out from the crowd, and we’d have to fend for ourselves against over 50 local brands.

BSCB: The Duster would be sold under the Renault brand in China?

LVDA: If we launch it in China it would be under Renault yes. The Chinese market is extremely interesting: a few years ago, Chinese brands didn’t seem to really exist, with poor quality and a relatively naive brand image, there were still in their development phase. I remember a few years ago you only saw foreign brands in Chinese cities, but it is now tipping the other way around, with Chinese brands now the main engine of growth here.

LVDA: Exactly, and the Kadjar and Koleos are for us a fresh opportunity to position the Renault marque a little more upmarket in China. It’s not a luxury we have everywhere, we traditionally are positioned lower in the market. In India for example we have a different strategy. If in China the C and D-segments are the core of the market, in India this type of vehicle is not very successful. To exist there you have to be successful in the smaller segments. In this context the Kwid has been…

The Renault Kwid has exceeded Renault’s expectations in India.

LVDA: It has been incredible. Our target was 5% market share in India by 2018 thanks to the Kwid and we believe we will hit that level this year already. But we have to continue being fast to market in India because Indian consumers are a little like Korean ones, they love you one minute and they ditch you the next. I give ourselves two years at most until market leader Maruti Suzuki replicates. We know they have already purchased five Kwid: they are dismantling and analysing them in the most minute detail as we speak, and they are a mighty force to be reckoned with thanks to their 2.000 showrooms vs. just 200 for us. The key for India isn’t to make one good car, but two, three or four. You need multiple pillars to rely on because the fashion effect is strong: the Duster was good for us for two years there but it’s slowing down now. The Kwid arrived just at the right time, but if we do nothing for two years, we’ll get back to square one again, so we have to act now.

AM: Back to China: are you noticing the copycat phenomenon by Chinese carmakers fading slightly?

LVDA: To me this is still somewhat of a niche phenomenon, it affects everyone but it won’t prevent us from implanting ourselves in China. We are still so small here that we hope no one will bother copying us! In any case, it’s not a long-term strategy, what kind of company can build themselves on copycats? I know there’s a copy of the Range Rover Evoque here [BSCB: the Landwind X7], is that type of vehicle successful commercially?

BSCB: Very. Landwind sold over 10.000 units for the first time in the brand’s history last March mainly thanks to the X7…

LVDA: Still, I don’t see it as a viable long-term, nor international strategy.

BSCB: What’s next for Renault after the Koleos?

LVDA: Our next new nameplate launch is the Alaskan pick-up truck: it will be manufactured in Mexico, Argentina and Spain, but not in China because of the license that was granted to us by the Chinese government which only allows us to manufacture SUVs here at this stage.

AM: Do you regret not coming into China earlier?

LVDA: Of course it’s better to be first in market, but Nissan has managed to get to almost 1 million annual units in China in less than 10 years, so it’s more about how well you use the time you have at your disposal. We will also benefit greatly from Nissan’s experience in the country, that already enabled us to build a factory in less than two years here.

BSCB: What models do you see the Koleos competing with in China?

LVDA: We have tested it and people immediately compared it with the Buick Envision, which I think is a good thing as it is quite successful here?

LVDA: That’s incredible. Any French car that hits that mark in Europe would make us very happy.

BSCB: The Kadjar started well in the Chinese sales charts. Does it compete with the Nissan Qashqai as it does in Europe?

LVDA: I think style-wise we are different, and I may be wrong but I have the feeling that people in China either buy Japanese or German/European but they don’t mix the two. We don’t see much cross-shopping in Europe for example, I am not 100% sure about the situation in China but I wouldn’t be surprised if that was the case also.

AM: Will you push the Kadjar’s “Frenchness” in China?

LVDA: It’s interesting you should ask that because in China people want the car to be made for them whereas in India it’s the contrary: if the car is made specifically for them they will assume it will be cheap and of poor quality. So in China we will focus on the fact that the car has been made for Chinese consumers.

BSCB: A typically Chinese habit: will you continue selling the previous generation Koleos alongside with the new one in China?

LVDA: It would be difficult for us to do so because the new locally-produced Koleos will be cheaper than the previous imported one. The biggest hurdle we have to overcome in China is our lack of visibility. We just don’t exist here yet. 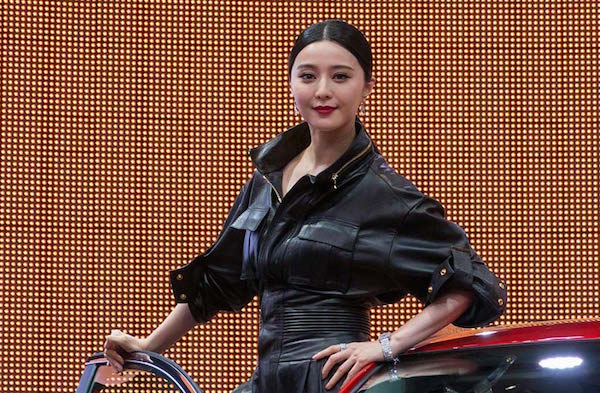 BSCB: What is your strategy to raise awareness in China?

LVDA: National advertising makes no sense in China because each slice of the market is of an enormous size so you have to segment the market in a lot more detail to reach your exact target audience. We have an ambassador in China, the actress Fan BingBing (X-Men, Iron Man 3) who is extremely famous here, so she will help us. We will also probably use our success in Formula 1 a lot and it’s one of the reasons we have remained in Formula 1: not necessarily for Europe but for emerging markets such as China and India.

BSCB: Are your Chinese dealerships only concentrated on the Eastern seaboard?

LVDA: No, our 128 dealerships are not just in the in the big cities on the coast, we are also targeting Tier 2 and Tier 3 cities.

BSCB: That’s important because the Chinese countryside are avid buyers of formats such as the Koleos: Honda CR-V, Toyota RAV4, Hyundai Tucson… And brand loyalty is still very low in China so you may have a good chance in these areas where the market is not as mature as on the coast.

[This is where Laurens becomes the interviewer]

LVDA: So do you guys work together?

AM: We collaborate on L’Automobile Magazine and Matt founded BestSellingCarsBlog…

LVDA: I know this site!

AM: …and he’s mad. You can ask him anything about any cars that sell where and he will know. He’s a human database.

BSCB: You’re too kind (big smile). I try to cover the Chinese market as closely as possible…

LVDA: So what is your advice for us in China Matt?

BSCB: To not make the mistake that many foreign manufacturers have made in the past two years in China, including Volkswagen and PSA Peugeot-Citroen.

BSCB: Not only have many foreigners failed to anticipate the sudden market shift towards SUV and crossovers,  they have also failed to act on it fast, contrary to Chinese carmakers which are gaining significant market share in the segment. With rare exceptions, the foreign carmakers seeing strong growth in China in 2016 are doing so because of new SUV offers in their lineup: Honda and Hyundai for example, whereas Volkswagen has not released anything in this segment since the previous generation Tiguan. With the Koleos and the Kadjar, your current China-made lineup taps right into this current trend which makes you ideally placed for now, but you’ll need to adapt fast if market conditions change.

LVDA: You were saying PSA Peugeot-Citroen don’t really have an SUV offer in China?

BSCB: They do, but it’s an ageing one and although they were once the only foreign manufacturer in China with Volkswagen, it looks like they don’t know this market despite 25 years of presence. Launching the DS 4S hatchback is a mistake: they should be launching one SUV after the next. The 4S sold 72 units in March in China vs. 2.750 for the Kadjar. That says it all.

LVDA: If I learnt something in China, it’s that hatchbacks are only really favoured in Europe…

BSCB: Correct! Also, Peugeot 2008 and 3008 sales are freefalling and the brand should be launching China-exclusive all-new 4008 and 5008 right now [incomprehensibly, the new 3008 was only revealed after the Beijing Auto Show]. On the flip-side, almost all Chinese carmakers present at the Show are launching at least one all-new SUV today, if not more. I believe I know the Chinese market pretty well, but each time I come to a Show I discover dozens of new Chinese models I didn’t even know were in development. Some local carmakers’s entire stands are filled with new models I had never seen before. SAIC-GM sold 42.000 copies of their Baojun 560 in March, 120.000 in 3 months! The Chinese market is evolving so fast, you really can’t afford to stand still.

LVDA: I better go and check them all out!

Here we are! We have now come to the end of our ranking of the…