skip to Main Content
COVID-19 Live Dashboard Sales - Forecasts - Our help
BSCB Exclusive: The car landscapes of 45 Chinese cities and regions
10 countries and 9000 km in a Dacia Duster
Test Drive: Is the Kia Seltos worth all the hype?
The world's best-selling car vs. the Australian Outback
BSCB Exclusive: Your Guide to all 190 Chinese Brands
* Full Year 2021 Reports * 85 markets available

A lot has happened in North Korea since our last report, so it’s time for a new one. This may be one of the most secretive countries and car markets in the world, but it has no secrets for BSCB. The North Korean new car market is still very limited with an estimated 1.000 to 1.500 new vehicles registered each year, but seems to have enjoyed a mini-boom over the last couple of years as more cars can be seen in the formerly deserted streets of the capital Pyongyang. You won’t find any made-in-Japan cars here though: in 2007, Kim Jong-Il ordered the confiscation of all Japanese-built vehicles… Made-in-China Toyotas are okay. 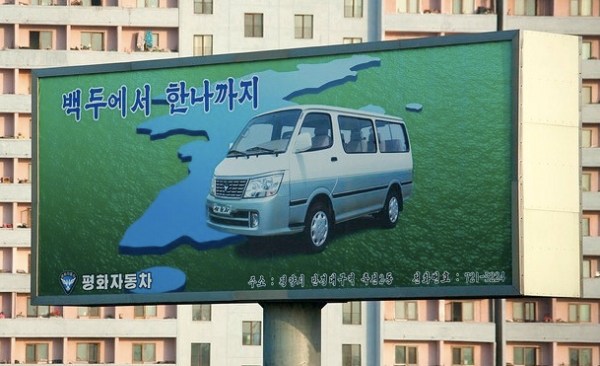 Advertising billboard for the Pyeonghwa Samchunri. Picture by Eric Lafforgue. All Rights reserved.

The reduced volume of Hawtai cars exported in 2015 means local brand Pyeonghwa Motors should reclaim the #1 best-seller title with its Samchunri minivan, a rebadged Jinbei Haise (itself based on the 1989 Toyota Hiace), assembled under license from Brilliance. Pyeonghwa Motors (meaning ‘Peace’ in Korean) was founded in 1999 and started assembling the first generation Fiat Palio and Doblo in 2002. The company has the exclusive rights to car production, purchase and used car sales in North Korea. It is also currently the only company in North Korea, all sectors put together, to have the right to advertise. A series of billboards (such as the one above) and TV commercials have been made in an effort to show residents that their country is able to produce products such as motor vehicles.

The Pyeonghwa Premio Max is exported to Vietnam.

Pyeonghwa Motors is originally the fruit of a controversial deal between South Korea’s Unification Church and the North Korean government, but the South Korean church dropped out in 2013 and since no reports on production or new models have been released. Indeed, the official Pyeonghwa Motors website hasn’t seen its English version updated since 2012. On top of the Samchunri, Pyeonghwa sells a range of rebadged Brilliance and Huanghai including the Hwiparam III (Brilliance FSV), Hwiparam II (Brilliance BS4), Premio CUV (Huanghai Shuanguan) and Premio Max pick-up (Huanghai Plutus) also exported in Vietnam through Mekong Auto (see above).

However a quick look at Pyeonghwa’s sole showroom in the country, in Pyongyang, (above) shows that at least two new partnerships with Chinese operations have been struck in the past couple of years. The first one is with FAW: the Oley, Besturn B50, FAW-VW Bora and Magotan can be seen in the showroom in pictures taken in September 2014. The second one is with Beijing Auto as we can see a BAIC E-Series hatch next to the new Samchunri as well as a BAW Jeep.

Other notable vehicles spotted in Pyongyang – mostly as taxis – are the BYD F3, VW Jetta, Ford Focus, once again made-in-China, as well as some Volvos and Ladas. If you have any additional information about the North Korean market please make sure to get in touch in the comments below.

Advertising billboard for the Pyeonghwa Samchunri. Picture by Eric Lafforgue. All Rights reserved. * See the…

Hawtai Lusheng E70 * See the Full article by clicking on the title! Many thanks…