skip to Main Content
COVID-19 Live Dashboard Sales - Forecasts - Our help
The world's best-selling car vs. the Australian Outback
BSCB Exclusive: Your Guide to all 186 Chinese Brands
* Full Year 2021 Reports * 34 markets available
BSCB Exclusive: The car landscapes of 45 Chinese cities and regions
10 countries and 9000 km in a Dacia Duster
Test Drive: Is the Kia Seltos worth all the hype?

The Wuling Mini Truck is the best-selling LCV in China for the first time in 2015.

As part of a partnership with local Consulting firm Cedars, we can share with you detailed data for the light commercial vehicle market in China with complete minivan, pickup and mini truck data by model available as well as selected light truck/bus data sourced with LMC Automotive. Overall, the LCV market has suffered greatly in 2015, down 8% year-on-year to 3.644.958 units vs. 3.976.257 in 2014. Looking into the various segments brings to light a drastic sales transfer from minivans (=microvans) towards mini trucks – the Chinese label for micro pickups, a trend we at BSCB started flagging back in April 2015 and particularly visible within the almighty Wuling brand and of course only noticeable way into the most rural parts of China. Back then I noted “the tremendous and recent success of the Wuling Mini Truck is something I had noticed in Western China in 2014 and again in the North-Eastern town of Mohe in 2015, where it is among the best-sellers in both locations. 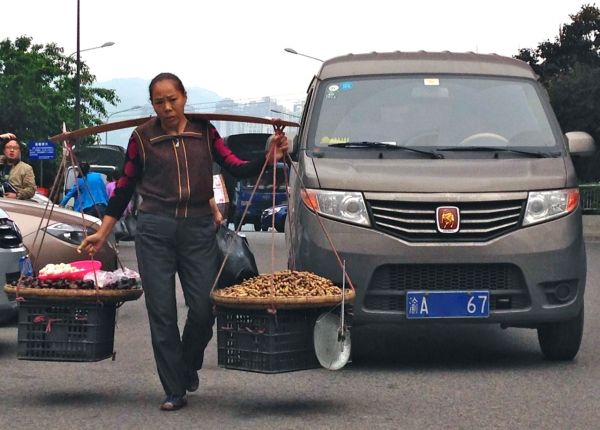 A thing of the past? Chinese micovans – in Chongqing, April 2014.

Minivans are down a devastating 36% this year to just 810.172 units from 1.262.942 in 2014. Not so long ago, the Wuling Sunshine alone would absorb this level of sales. It would seem the age of the ultra-cheap, ultra-unsafe microvans is well and truly becoming a thing of the past in China just as inhabitants of the countryside are steadily becoming a lot wealthier. As described above, Mini Trucks are the only beam of sunshine in an otherwise truly depressed Chinese LCV market: up 1% to 442.625 units. Pickup trucks are in freefall at -16% to 328.933 sales. The remaining amount – up 10% to 2.063.228 units, is composed of light trucks and buses, a vague definition in China about which we are still trying to get 100% visibilty.

In the models ranking, as a fitting symbol of the market turning to micro pickups, the Wuling Mini Truck edges past the Foton Light Truck, #1 for most of the year, towards the last few days of 2015 to sign its very first LCV pole position with sales up a vigorous 10% to 242.399 vs. 241.307 (-7%) for the Foton, whose “Light Truck” label actually includes a full range of medium commercial pickups under the Forland sub-brand. Once the LCV champion, the Wuling Sunshine is down 26% to #3 but it’s the Rongguang, still #1 in 2014, that implodes at -44% to a paltry 5th position.

Part of the reason why these two nameplates have suffered so badly this year is the introduction of the all-new Hongguang V, Wuling’s attempt at upgrading those Sunshine/Rongguang owners that just can’t get themselves to splurge on the Hongguang MPV or, even dearer, the Baojun 730. And it’s worked: almost 200.000 units of the Hongguang V found a buyer in less than 12 months, with the model getting a tax-cut sponsored 2nd wind at the end of the year (19.662 sales in December) after a very impressive peak of 30.003 as early as March.

The Great Wall Wingle 5 is still the best-selling one ton pick-up in China.

The Chery QQ Ice Cream has landed in the Chinese charts. After detailing  November 2021…